Be careful.
It’s nice to have a visitor, but don’t wander too far, or stare too deeply.
Getting lost is easy, and some things can’t be unseen.

Book one of the Perception series 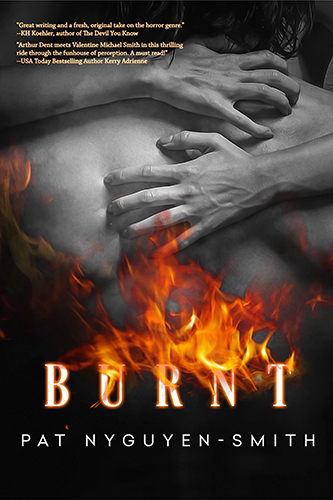 Art scares everyone, even himself. He wasn’t raised right, looks impossibly dangerous, has
frequent, murderous impulses, and sees things that can’t be real. But he’s been trying to
change, and it was working. Right up until an accident incinerates nine/tenths of his skin,
sending him on an uninsured, no expenses paid trip to the hospital.

The unrelenting pain drives him to the bleeding edge of his control, the hallucinations
intermittently blind him to reality, and both things make him terrifying.

Except to the nurse who isn’t scared. Ida only sees a hero struggling with impossible nobility
to rise above his darker nature. A man that, just maybe, she can finally trust not to hurt her.

Three things that expose true intentions like bare nerve endings, stripping away the
insulation of flowery words and pretty lies.

And somehow, he’s still kind, treats her like an equal, and sees her as a person. Instead
of a desirable, helpless toy.

She’s been praying for a miracle. Not for herself, but for something to counter the malicious,
invisible force that roams the hospital corridors, growing more powerful and deadly every
day. A thing that no one will acknowledge, but that everybody fears.
Everyone else looks at Art and sees a hideous monster.
Ida sees the answer to her prayers. All of them.
It’s a matter of Perception.

“Great writing and a fresh, original take on the horror genre.”
—KH Koehler, author of The Devil You Know

“Arthur Dent meets Valentine Michael Smith in this thrilling ride
through the funhouse of perception.
A must read!”
—Kerry Adrienne

The characters themselves may occasionally be foolish, brave, or strong enough to answer a question, but the name Pat Nyguyen-Smith hides a person whose only protection is to remain hidden, unheard, and unseen.

Be warned though. Contact is unlikely. Each fragile attempt must navigate a realm of pain, fear, and blinding fog. Few can hope to survive intact, and of those which do, even more will fall to the hungry things which call this ocean home.

The current only flows one way. No bottle can return. But replies could, possibly, be carved on bare rock in letters miles high. Few mountains on your shore stand tall enough to view these responses around the curve of reality, but one such peak can be found here.

Art Crocket has been plagued since childhood with bizarre hallucinations. It makes getting
through even a normal day pretty tough. Now a life threatening accident lands him in a
hospital where patients are dying under impossible circumstances, and the new normal is
figuring out how to stay alive. Learning to use visions he’s spent a lifetime denying is his
only tool. Learning to trust someone after a lifetime of betrayal is his only hope. But every
lesson risks another life lost, and his might be next.